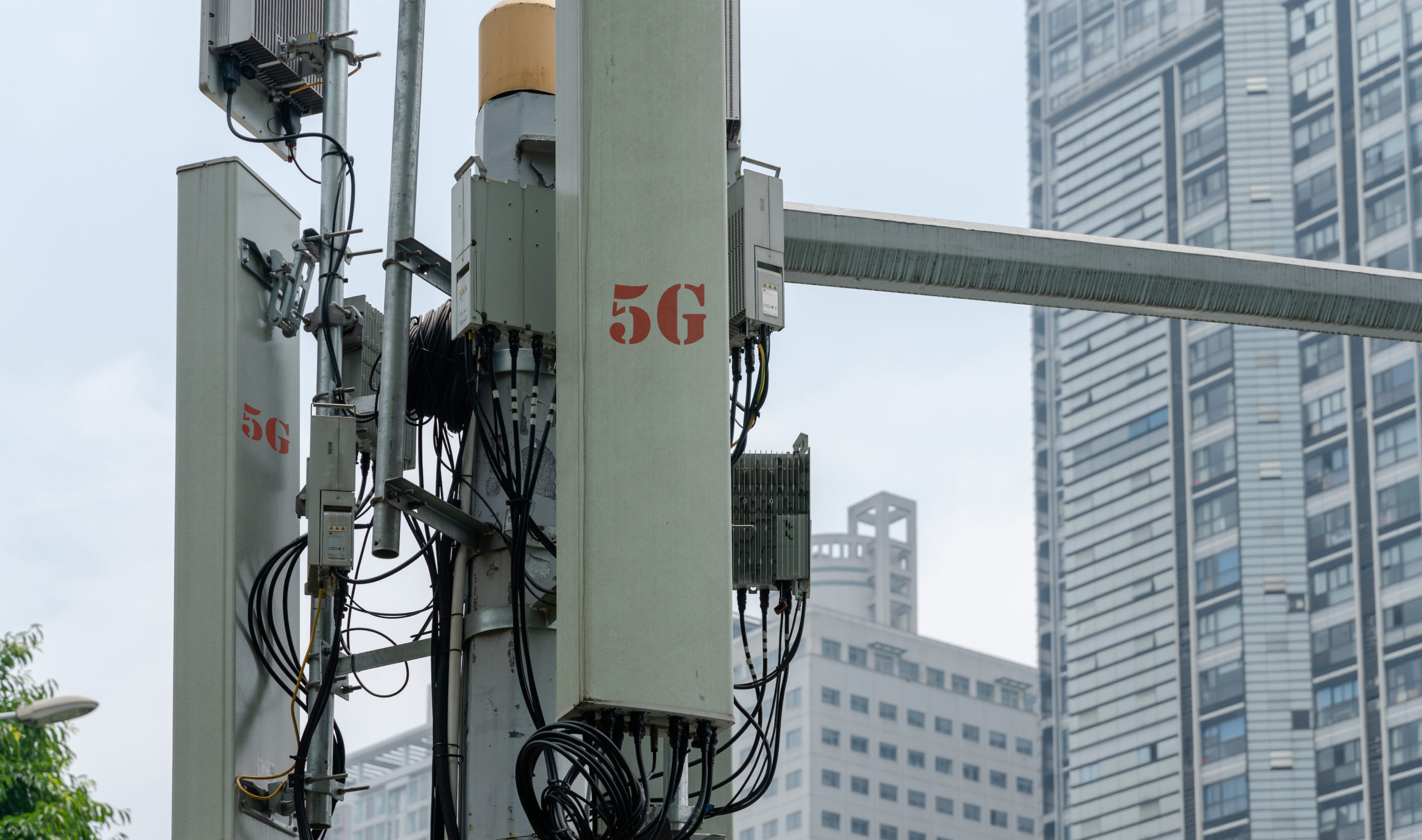 A new era in communication: what is 5G and how is this technology changing Europe?

Last year, as the new coronavirus SARS-CoV-2 began to spread around the globe, groups of people appeared in various parts of the world, spreading various conspiracy theories around the causes of the pandemic.

Among their targets was the new generation of 5G mobile communication technology. In some places, such actions took on significant proportions: radio base stations were destroyed, conspiracy theories about the influence of Bill Gates and big tech corporations were spread, and “protection” against allegedly harmful 5G waves was developed in the form of foil caps.

Even in Ukraine, a petition was launched on the official website of the President, demanding to “ban the introduction of 5G due to its extremely negative impact on health”, which has received the required number of signatures for consideration.

To try to understand the real impact of 5G, whether we should worry, and what it means for the development of communication, we spoke to experts of the European Union’s EU4Digital initiative, who have been working with Ukraine and the countries of the Eastern Partnership to support better coverage of mobile networks, including 5G services.

In the language of telecom experts, “5G” is just a new – 5th – generation telecommunications standard.

Technically, the point of 5G is to provide higher bandwidth and faster network reaction times, compared to the current generation of 4G mobile communications, which has become widespread even in the remotest parts of the planet.

The 3GPP consortium, which develops specifications for mobile telephony, called the 5G radio interface the “New Radio” or simply NR. This specification is divided into two band frequencies, in the spectrum of which 5G will work (or, more precisely, already works): FR1 (600-6000 MHz) and FR2 (24-100 GHz).

In terms of peak data rates, which are specific to different generations of mobile communications, 5G technology is about 20 times faster than the current 4G. The maximum speed value for 5G is 20 Gbps, and for 4G – 1 Gbps.

However, it should be noted that these are only the peak values reached by engineers in the laboratory and with the use of professional equipment. For “mere mortals”, 5G will mean approximately the same data transfer rate, namely, downloading data at the level of 50-100 Mbps – lower than the theoretical “ceiling” of 4G.

So, what is the point of introducing 5G, if this technology does not radically change the experience of using mobile coverage for ordinary users? The fact is that the new communication standard has been developed using more modern technologies, taking into account more efficient methods of encoding and signal protection.

In practice, this means that operators, for instance, will be able to use a smaller amount of radio frequencies to serve more users. That is why most technology experts predict that the priority areas for 5G implementation will be the Internet of Things (IoT) and various infrastructure projects, including unmanned vehicle control systems, ‘smart’ roads, cloud technologies, computing large data sets and more.

How does 5G affect health?

First, we should keep in mind that the deployment of all generations of mobile communications without exception was accompanied by outbreaks of radiophobia. The 5G standard is not the luckiest, as its active development has coincided, first with a period of international trade wars and suspicion over the use of Chinese technology in 5G infrastructure, and then the unprecedented COVID-19 pandemic.

Second, people with a sufficient level of critical thinking and access to information know that the World Health Organization and national telecoms regulators in different countries, including the EU, have denied any negative impact of 5G on human health.

Given that the harmfulness of any radio equipment is regulated by sanitary standards of electromagnetic radiation (measured in microwatts per square centimetre of surface), uncertified gadgets pose a much greater threat to human health than even the most powerful 5G base stations.

Developing 5G in Europe and the Eastern Partnership

The development of the agreement started in December 2019, and its main goal is to free up the 700 MHz and 3.4-3.8 GHz bands for the rapid deployment of 5G networks and better coverage of next-generation mobile services.

The final version of the agreement is expected to be agreed and approved by the Eastern Partner countries during the Panel on Harmonisation of Digital Markets later this year, and signed in late 2021.

“The Regional Spectrum Agreement makes it possible to harmonise key frequency bands for the development of 5G technology in the Eastern Partnership region. This regional agreement will certainly accelerate the development of 5G in the Eastern Partnership countries. In terms of spectrum, the main benefits of harmonisation are the reduction of cross-border interference and the simplification of coordination processes between neighbouring countries, which allows the use of 5G spectrum throughout the country,” said Jorune Mikulenaite, Deputy Head of Radio and TV Broadcasting Division at the Communications Regulatory Authority of the Republic of Lithuania.

According to her, consumers will benefit from 5G spectrum harmonisation due to better coverage, significantly higher download speeds and the use of 5G in industrial solutions.

What are the prospects for 5G development?

“5G is a new generation of mobile technology that, unlike existing ones, offers customers faster and more efficient capabilities. In addition to speed, 5G means fewer delays, allowing thousands of devices to connect and operate simultaneously in both small and large spaces,” explains EU4Digital RSA Coordinator Nino Grdzelishvili.

Grdzelishvili is convinced that 5G is not just a new generation technology, “it is a technology that provides ten and in some cases 100 times higher connection speed than previous generations, depending on the service and product”.

The expert emphasises that in addition to improving the quality of telecommunications services for ordinary citizens, the introduction of 5G technology should transform such important areas as health care, education, business, agriculture and infrastructure, which, in turn, strengthens the economy of any country.

Regarding the worries surrounding the introduction of 5G, Nino Grdzelishvili explains: “Fears and differences of opinion also accompanied the process of implementing 2G, 3G and LTE, and this applies to any new technology. Many years of experience have shown that after providing the right information, fears disappear and people use all new technologies every day.”

The RSA coordinator assures that in the digital age, mobile internet has become an integral part of our lives, so 5G is a new stage of development that will bring significant positive changes.

“The RSA was initiated by Georgia in 2019 within the Eastern Partnership Electronic Communications Regulators Network (EaPeReg). This Agreement will regulate the operation of 5G networks in accordance with the technical parameters and conditions that correspond to the decisions of the European Commission, the European Council and the European Parliament, as well as promote international coordination with the neighbouring countries,” said Nino Grdzelishvili.

In addition to the smooth operation of 5G networks, the signing of this agreement should establish closer cooperation between EU member states and the Eastern Partnership countries.

“As of September 2020, 5G coverage is commercially available in 47 countries thanks to 107 operators. The new generation technology is already available in Austria, Belgium, Bulgaria, the Czech Republic, Denmark, Finland, Germany, Hungary and Ireland, as well as in Italy, Latvia, the Netherlands, Poland, Romania, Slovenia, Spain, Sweden, Norway, the United Kingdom and Switzerland,” the RSA expert says.

In order to develop a new mobile network, the EU has also announced more than twenty cities for 5G testing, where various services practice the use of technology. These cities include Barcelona, Berlin, Amsterdam, Bari, London, Madrid, Malaga, Milan, Stockholm, Tallinn, Turin and nine French cities.

The article has been prepared as part of the EU4Digital programme. The views expressed in the article are solely those of the author.