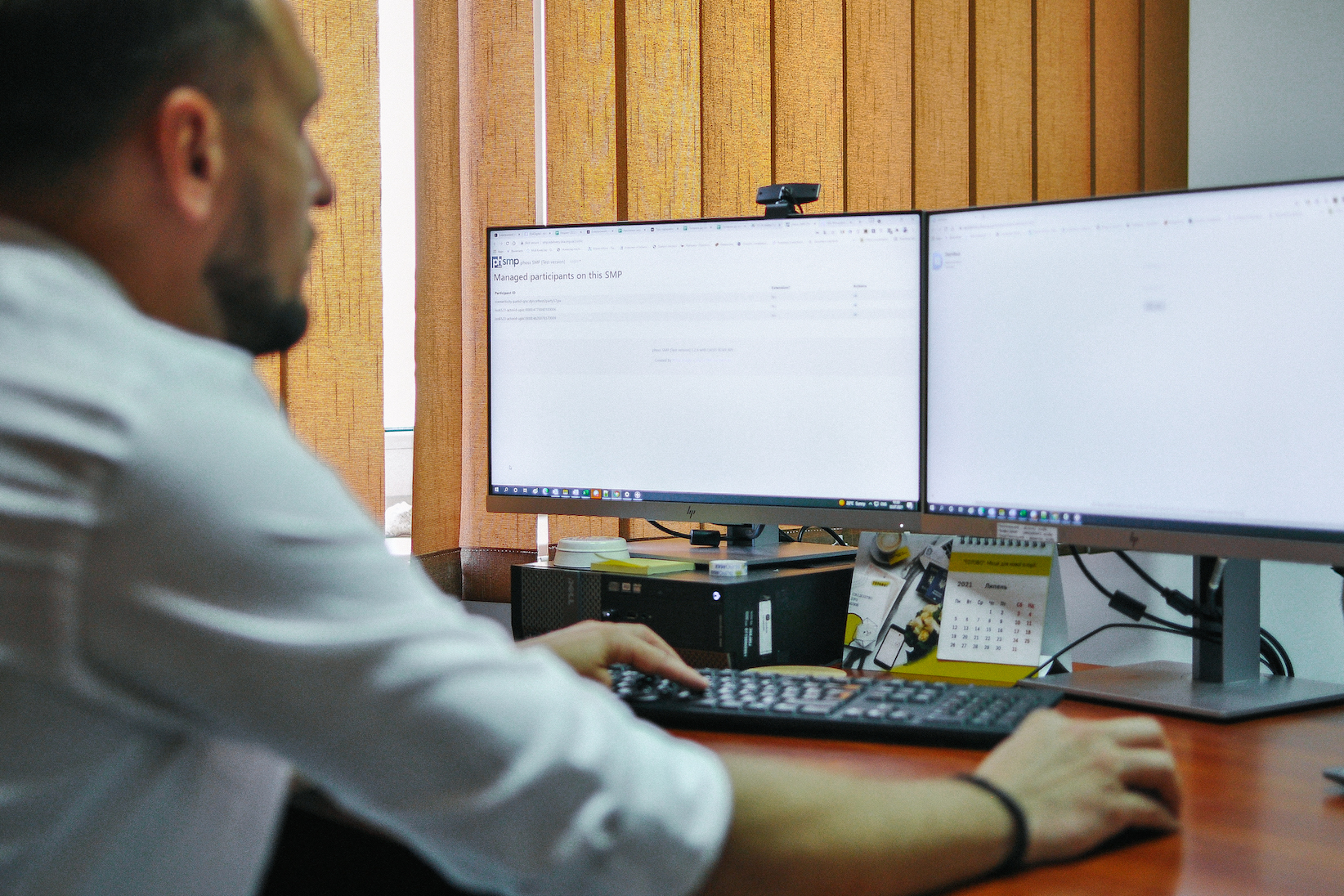 Cutting through the paper chain: EU opens the digital path to trade in Ukraine

Endless paperwork, delays and the risk of data loss – these are common challenges faced by Ukrainian businesses involved in international trade.

The paper chain not only uses up human resources, but ensuing delays can result in late payments and lost revenues, while insecure data can put an entire business at risk.

However, there is good news: a solution may soon be at hand in the form of eDelivery, a secure electronic data and document exchange channel, recently tested in Ukraine through a pilot project supported by the European Union’s EU4Digital initiative, and which could soon be applied by all Ukrainian companies.

So what exactly is eDelivery, and what benefits can this solution bring to Ukrainian business? The answers can be found at the Ministry of Digital Transformation, established in 2019 with an ambitious agenda for a comprehensive digital transformation in the public sector.

Sparsely furnished and sporting Marvel superhero posters on the walls, the Ministry’s offices stand out from the traditional corridors of government, but it’s what happens inside those offices that marks a real break from the past. The ministry has played a key role in accelerating the country’s digital transition in response to the global pandemic, and was a key partner working with EU4Digital to test the eDelivery solution in Ukraine.

“eDelivery is one of the re-usable technical solutions of the European Digital Single Market,” says Michael Latynskyi, the eDeliverypilot project manager from the Ministry, explaining how this EU-wide solution for the exchange of invoices and other data connects businesses, not just within the EU, but even beyond to countries like Canada and Singapore.

“Its development was aimed at improving digital public services by introducing the exchange of electronic data across national borders, in a secure, reliable and proven way,” he explains.

“Public procurement became an opportunity to test this system, and after its successful launch, it was decided to extend it to other areas of public life,” says Gulsana Mamediyeva, head of the European Integration Directorate at the Ministry of Digital Transformation.

So how will the introduction of the electronic data exchange system (EDS) facilitate the cooperation of Ukrainian businesses with foreign, primarily European partners?

“One of the first problems that businesses mention is the difficulty of exchanging documents. Every signed agreement becomes a real challenge for accounting,” says Michael Latynskyi.

Scanned agreements do not have legal force, and it can take weeks to get the originals.

“Then there is the high cost of sending regular letters abroad, as well as the risk of leakage of confidential business information if it is transmitted in postal items sent to a regular mailbox,” Latynskyi adds.

But eDelivery can provide a solution to these problems.

What the pilot project did was to create a national access point in Ukraine (currently on the grounds of the state enterprise “Diia”) and connect it to the Peppol network, linking the Ukrainian and European networks into a single network.

“During the pilot, a test exchange of electronic invoices took place between Ukrainian and Polish companies,” says Latynskyi. Tests were also carried out between Ukraine and Armenia.

Electronic document management provider EDIN set up the technical infrastructure for the Ukrainian companies to be able to participate in the pilot.

“We have already provided similar services, so it was interesting for us to join this pilot project, because it creates a new market in Ukraine,” says EDIN Director of Service, Integration and Monitoring, Eduard Kishkovskyy.

“The transition to electronic document management has greatly simplified our work,” said the director of Kernel’s IT-department, Andriy Peshyy. “Obviously, working with such tools will be much more efficient.”

He also welcomed the security provided by the eDelivery solution, and confirmed that data leaks were a concern to businesses like his.

So what benefits does the company get from the opportunity to exchange documents electronically?

According to Olha Kadyrova, Kernel’s head of bottled oil exports, the use of the eDelivery system will help to overcome the bottleneck of paperwork, thus reducing the risk of delays in deliveries and, consequently, penalties from European partners.

“We can already say that the main goal of the project has already been achieved,” says Michael Latynskyi. “Businesses and government agencies have gained experience on best practices for electronic data exchange with EU countries. It is really amazing that a stack of papers can be replaced with an electronic document.”

At the same time, the Ministry of Digital Transformation points out that exchange of invoices is not the only area where eDelivery will be used in Ukraine.

In the EU, the Peppol network was initially developed for the area of public procurement, in particular to support the EU eProcurement Directive, which Ukraine must also implement as part of the Association Agreement with the EU. So if necessary, this system can be used in Ukraine as well.

Another area where eDelivery can be applied is during the introduction of an electronic consignment note system, which would digitise domestic road haulage. Additionally, the experience gained during the pilot project will be used to implement the classic trust service of registered electronic delivery.

Rolling out the eDelivery solution

The state enterprise “Diia”, which manages the Diia State eServices Portal, is now working to switch from the pilot to full-scale use of eDelivery, which would allow Ukrainian companies to use it in the EU’s internal market, as well as with more than 30 countries in the EU and beyond.

Dmytro Huk, the head of the Electronic Trust Services Department at “Diia”, demonstrates the system interface on his computer, adding that work is ongoing to improve the interface and that details of the rollout, including pricing, are still being worked out to make it attractive for companies to move from analogue to digital.

“The engine of the system is ready for use, and we hope to launch fully by early 2022,” he says, adding that other operators could in the future also provide access to the system, as is the case in EU countries – “we expect that this market will be quite competitive”, and Ukrainian businesses will reap the benefits.

The eDelivery pilot was implemented in Ukraine as part of the European Union’s EU4Digital initiative, which supports the harmonisation of digital markets in the Eastern partner countries. In the area of eTrade, EU4Digital supports supports trade facilitation and harmonisation among Eastern Partner countries and with the EU, by promoting common frameworks for eCommerce, eCustoms and eLogistics, and working towards Digital Transport Corridors.

The article is prepared in cooperation with the EU4Digital programme. The views expressed in the article reflect solely position of the author.