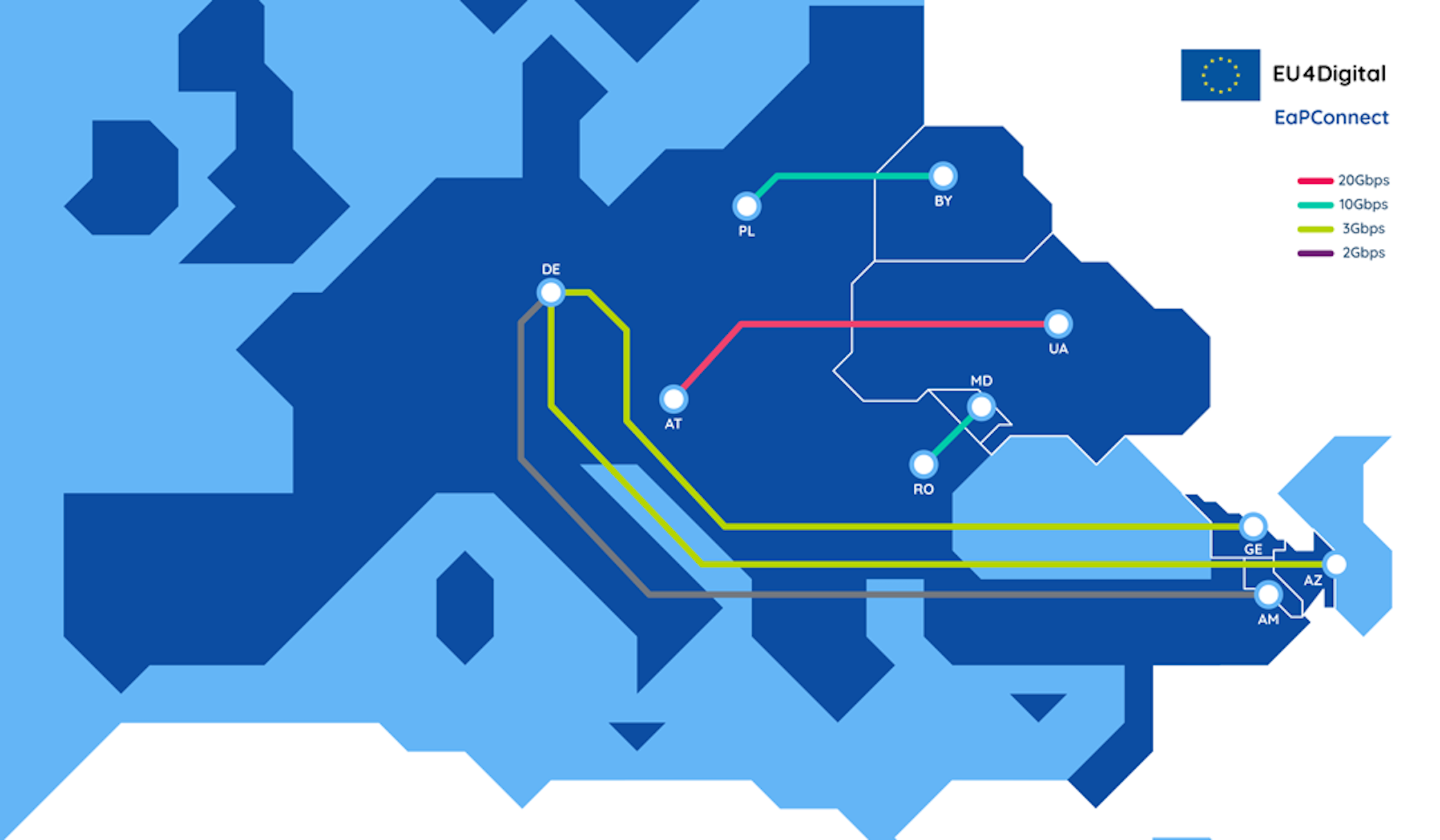 More research data can flow between Ukraine and other countries more cheaply, allowing Ukrainians better to participate in international research cooperations without having to leave the country, thanks to the EU-funded EaPConnect project and local partner URAN (the Association of Users of Ukrainian Research and Academic Network).

A very secure, high-capacity Internet link for research data transmission between Ukraine and the GÉANT pan-European research and education (R&E) network now provides twice the capacity of the previous connection, but at less than half the previous price per Gigabit per second (Gbps) of data transmitted.

The network link runs between Kyiv and Vienna. This link, established by EaPConnect in 2017, had taken Ukraine’s connection with the GÉANT network from 1 to 10 Gbps. The new upgrade has doubled its total capacity to 20 Gbps and reduced the price per Gbps/year by 55%.

“It is exciting to see this progress in research and education connectivity, because a 20 Gbps link brings Ukraine closer to the levels of network capacity that are usual in many European countries. This development brings greater digital equality between the countries and between our research and education communities, and means that Ukrainian scientists and educators will be able to work more effectively and efficiently on large-scale international projects that involve big data.” said Yevhenii Preobrazhenskyi, Executive Director of URAN

Why is connectivity important?

Connectivity improvements are critical for data-intensive research, for example in the field of high-energy physics. Previous network connectivity improvements in Ukraine had already boosted the ability of a team at Kharkiv Institute of Physics and Technology (KIPT) to participate in international efforts to process data from CERN’s Large Hadron Collider CMS experiment – the only Ukrainian research team that is able to do so. The newly expanded network channel will allow this team to speed up this data processing, not only providing greater satisfaction to the researchers, but also increasing Ukraine’s reputation in the international scientific arena.

Improving Internet connectivity addresses inequalities between Eastern partner and European Union countries in their access to, use of, or the impact of information and communications technologies – known as the digital divide. Reducing the digital divide between EaP and EU countries is a key objective of the EaPConnect project, which is part of the EU4Digital initiative of the European Union. These activities align with the European Neighbourhood policy that supports increased interconnectivity and economic development for the European Union and its neighbours.

The EaPConnect project entered a second 5-year phase in July 2020 and will continue to improve network connectivity and reduce the digital divide between Europe and Eastern Partnership countries.

The improved capacity in Ukraine builds on achievements in the first five years of the EaPConnect project, which saw 30-80% price reductions and connectivity capacity increase seven-fold in Armenia and tenfold in Georgia, Azerbaijan, Moldova, Ukraine and Belarus.