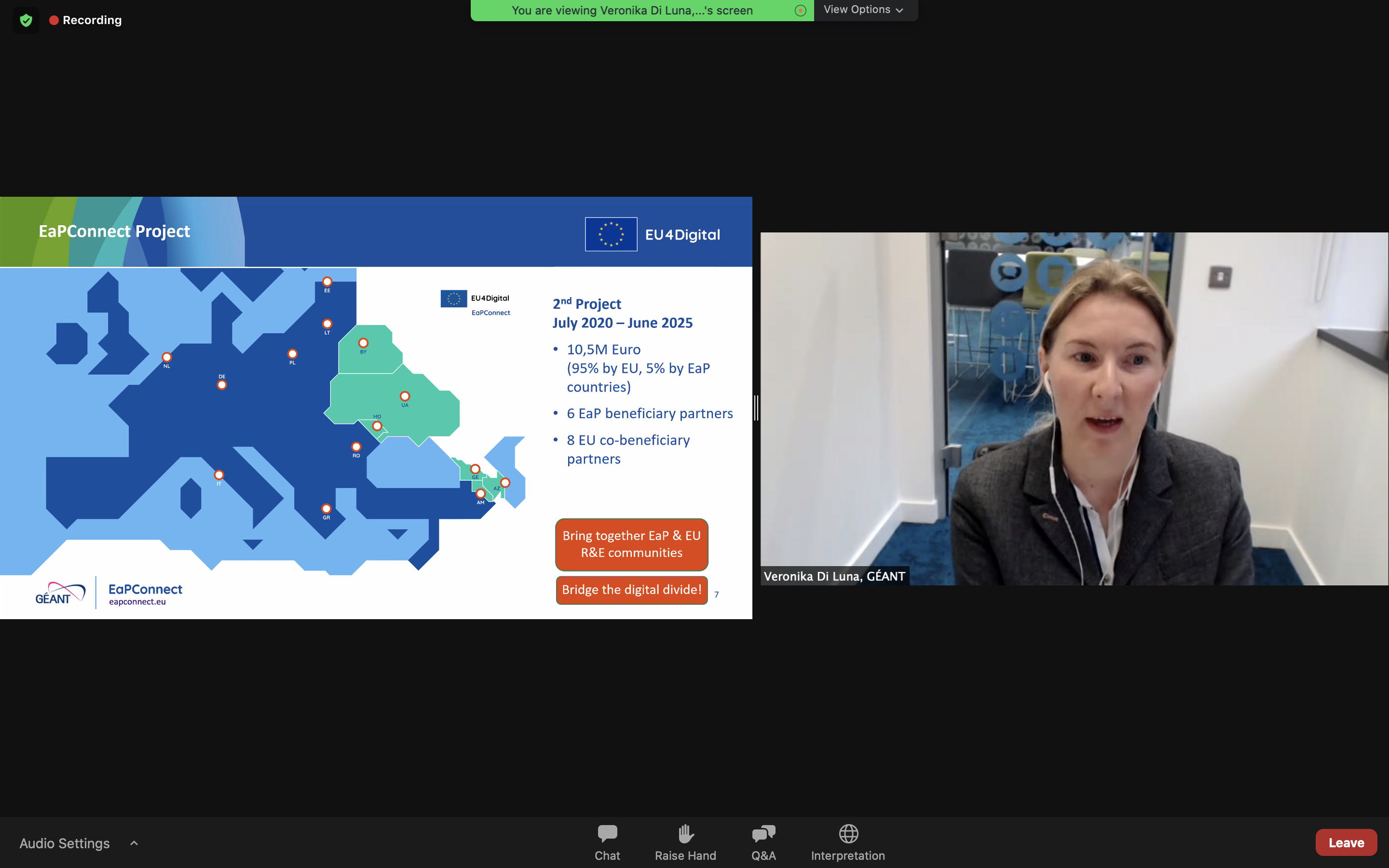 Past achievements and future goals of the EU-funded ‘EU4Digital: Connecting Research and Education Communities’ project, known as EaPConnect, were presented at a high-level meeting organised by the EU4Digital Facility on 5 October 2020, officially kicking off the second five-year phase of the project.

The kick-off was organised as part of the second annual Steering Committee Meeting of the EU4Digital Initiative, running from 5-9 October.

More than 65 participants including representatives of Eastern partner country ministries, EU Delegations, and EU institutions were welcomed by Mathieu Bousquet, Head of Unit at the European Commission’s DG NEAR – the Directorate General for Neighbourhood and Enlargement Negotiations – which is funding EaPConnect.

“If we are talking about a partnership that delivers, I think this is a good example,” said Mathieu Bousquet, DG NEAR, Head of UNIT, summarising the key achievements of the first EaPConnect project during the kick-off event.

Representatives of DG CONNECT – the Directorate General for Communications Networks, Content and Technology – and of DG R&I – the Directorate General for Research and Innovation – highlighted achievements to date and expectations of the second project: the provision of long-term connectivity; the maintenance of smooth experiences for research and education communities during COVID-19; and the ability for dedicated networks, services and collaboration tools provided by national research and education networks (NRENs) to support interdisciplinarity, which is vital in research and a focus of the upcoming Horizon Europe framework programme.

Key objectives in the second phase are to bring together the Eastern partner and EU research and education communities, to bridge the digital divide between them, to ensure that EaP students and researches are as present in international initiatives and projects as anybody else in Europe. Veronika Di Luna, Senior International Relations Project Manager at GÉANT presented an overview, emphasising that sustainability of the partner national research and education networks (NRENs) is essential for their long-term ability to support their R&E communities and national digital agendas. Raising visibility of the value of the project and partners’ achievements is also essential.

Erik Huizer, CEO of GÉANT, explained how NRENs and GÉANT support R&E and wider society. Plans to improve both the GÉANT and EaPConnect networks with fibre technology in coming years will help to reduce the digital divide: “By the end of both projects the EaP countries will be at exactly the same level of connectivity for R&E as the rest of Europe.”

The EU4Digital Second annual Steering Committee Meeting was organised by the EU4Digital Facility as a series of virtual sessions, reviewing results achieved under the programme and discussing upcoming Eastern Partnership priorities in the digital sector.