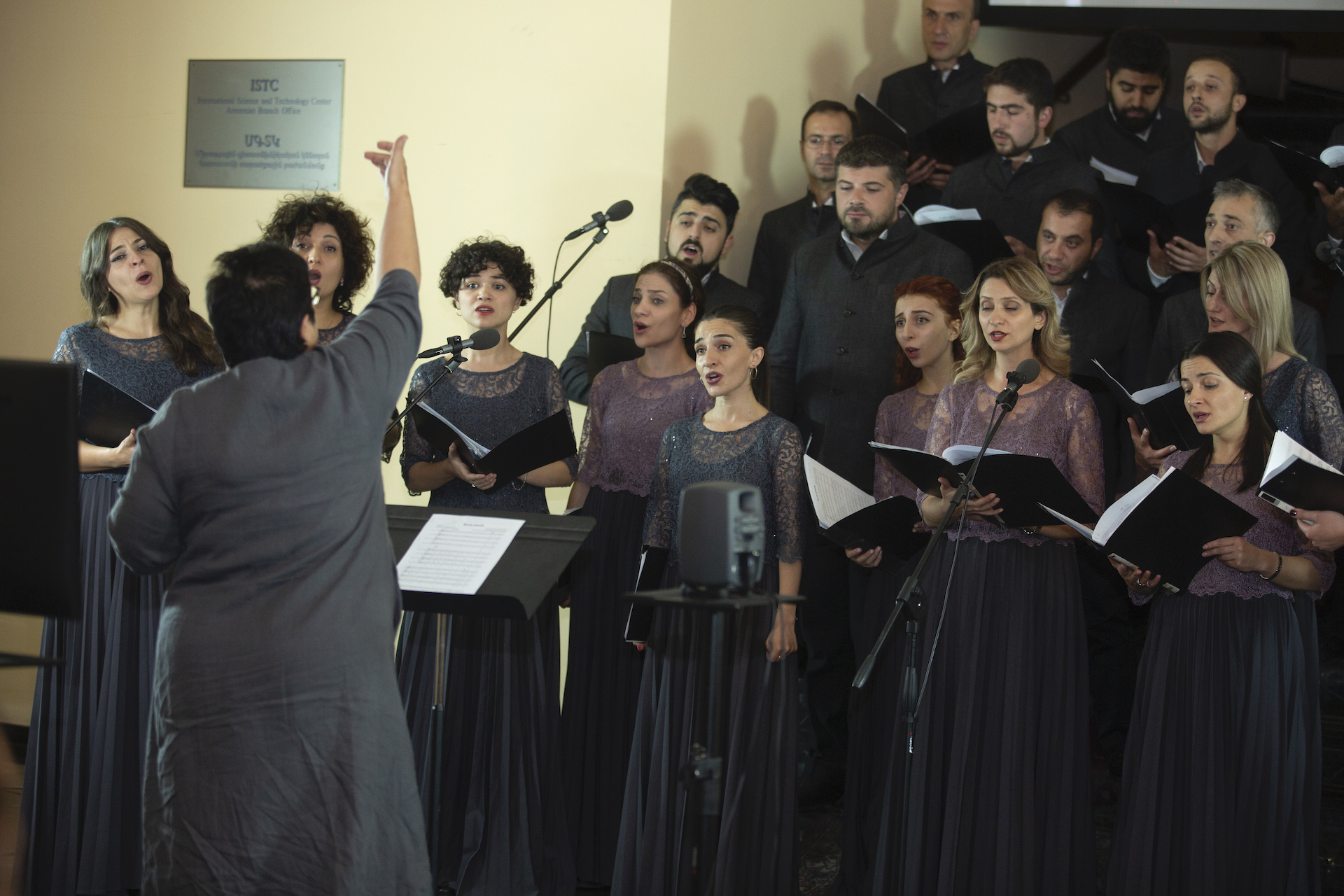 When 17th century composers created music to be performed in St. Mark’s Basilica in Venice, little did they realise that their ground-breaking musical techniques would allow a 21st century performance across a record-breaking 5,000 kilometres. Or that this would create a musical connection between the Armenian diaspora in Venice and Armenia itself.

Two top choirs and partners in the EU-funded Eastern Partnership Connect (EaPConnect) project created a musical bridge between Venice (Italy) and Yerevan (Armenia) with the help of LoLa (low latency) audio-video transmission technology and cutting-edge research and education networks. Thirty-five a capella singers in the two countries performed together in one distributed concert, ‘Connecting with Culture’, in a spectacular opening for the 4th Eastern Partnership E-Infrastructures Conference, EaPEC 2019. This was the first performance in Armenia to use LoLa technology.

Although Yerevan and Venice are ‘only’ around 3,400 kilometres apart, the networks that carried the digital signal between the two choirs totalled around 5,000km, crossing seven countries, from Italy through Switzerland, Germany, Poland, Ukraine, Georgia and into Armenia. This is the longest distance spanned so far for any LoLa concert.

Such a distance raises technical challenges for musical interaction, because greater distance brings greater ‘latency’ or delay in the digital signal transmission along the networks. Even if the signal runs at the speed of light (200,000 km/sec), the laws of physics say it cannot cover the distance faster. As it happens, 17th century Venetian composers struggled with a similar problem – the delay caused by the speed of sound in air – as their choirs were often divided across the large space within St. Mark’s Basilica, but had to deliver one coordinated sound to their audience. By chance, the delay in St. Mark’s is nearly identical to the delay along the network from Venice to Yerevan; about 40 milliseconds. These composers – including Monteverdi, Gabrieli, Croce – invented musical techniques that accounted for such delays within the church setting. Their techniques were then used around 400 years later to help achieve the ‘Connecting with Culture’ concert, allowing the two choirs to perform together without any perceivable delay.

‘Connecting with Culture’ featured music by Venetian composers Giovanni Croce and Andrea Gabrieli and by the Armenian composer Komitas. Performed by the Hover State Chamber Choir in Yerevan and by the soloists of the Cappella Marciana in Venice, this event demonstrated the potential of digital technologies to support harmonious cross-border collaboration. The concert was the culmination of collaborative work between the national research and education networks in Armenia – IIAP NAS RA – and in Italy – GARR, with the support of Conservatorio Tartini in Trieste and Ca’ Foscari University in Venice. The concert and the EaPEC conference were organised by the EU-funded EaPConnect project and were hosted by IIAP NAS RA in Yerevan on 24-26 September 2019.

Through the rehearsals and the performance, this collaboration also succeeded in making connections between Armenia and the Venetian part of the Armenian diaspora. Venice was chosen as the partner site for this international concert because of the important Armenian cultural heritage present in the city, as well as its conspicuous Armenian community. Invitations to participate in the Venice concert audience were extended to members of the Armenian community there, and the conductor of the Cappella Marciana for this event, Justine Rapaccioli, the first woman to hold the post in the choir’s 700-year history, is of Armenian descent. Hopefully, the relationships established through this collaboration will continue.

“I like to think that we created a musical bridge, a dialogue, and bridges of this kind are what we really need in the world nowadays”

LoLa, coupled with advanced research and education networks, allows geographically distributed musicians, dancers, actors and other artists to work together in real time without significant distortion or delay. The technology has been in use in music schools in Europe, North America and elsewhere for teaching, masterclasses, rehearsals and performances since its first public demonstration in 2010, and is now available in Eastern Partnership countries thanks to the EaPConnect project.

The LoLa project research and development team is a collaboration between Conservatorio di Musica Giuseppe Tartini, Trieste, and the Italian research and academic network, GARR.

A full recording of the ‘Connecting with Culture’ concert is available on the GARR TV website.

The ‘Connecting with Culture’ concert video, produced by Consortium GARR and featuring Justine Rapaccioli, and the EaPEC 2019 video produced by EaPConnect are both available on the EaPConnect playlist in YouTube.

This story was first published by the EaP Connect programme.