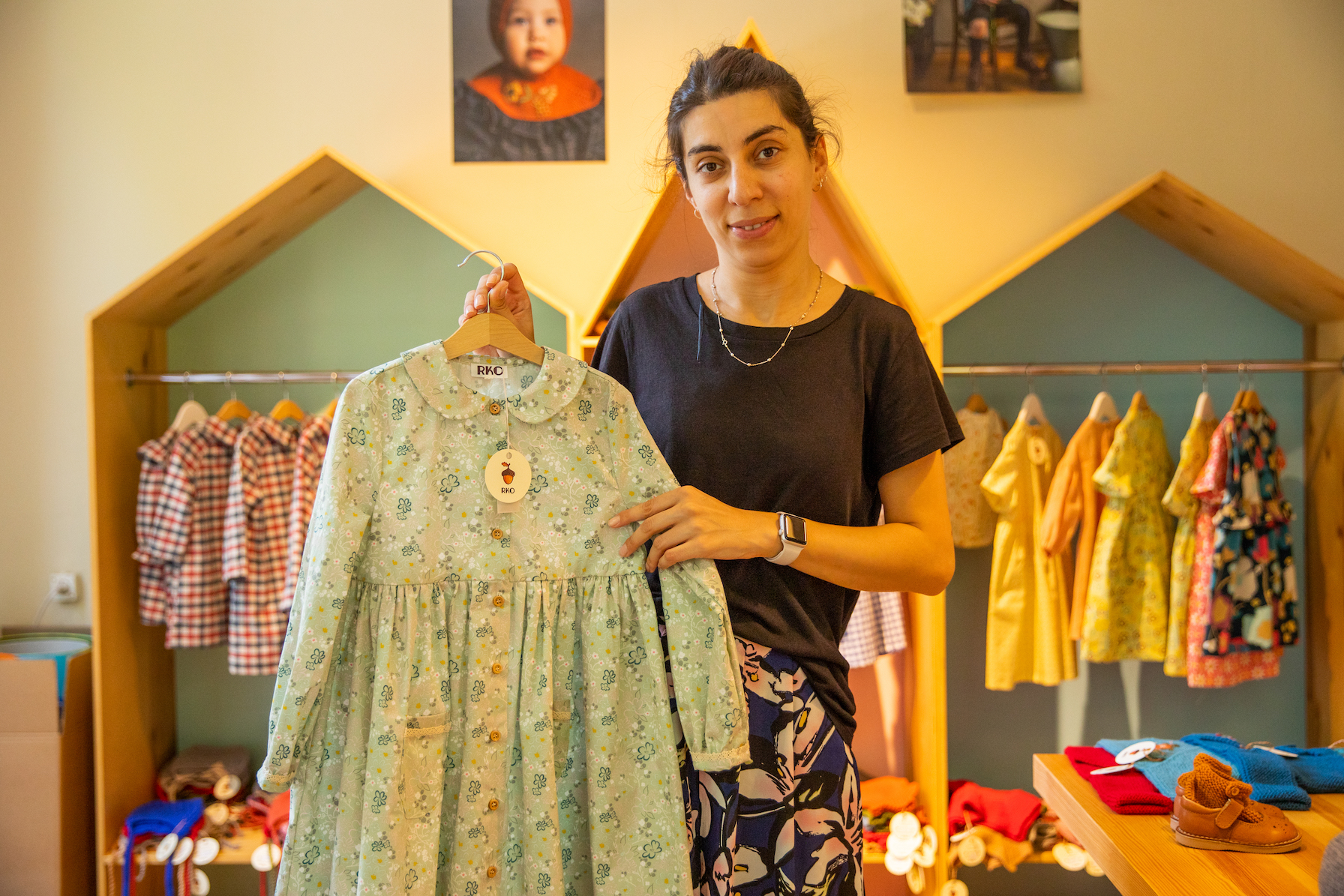 It all began with three young mums. Established in autumn 2016, children’s clothing company RKO started out as a small enterprise, but its founders had big plans for its development, and soon after it was established, the brand took its first steps in the international market.

“Every year, we take part in Playtime Paris, an international exhibition that brings together sellers and buyers, and we’ve seen considerable interest from international buyers. Exports represent the largest part of our sales,” says Veriko Nanoshvili, the company’s International Sales Manager, adding that the company had also set up on Etsy, a global online marketplace to make, sell, buy, and collect unique items.

“So we were delighted when we were offered the chance to participate in the EU’s eCommerce pilot project and we agreed at once. This project is especially important for us, the more so as we are only two companies selected from Georgia.”

RKO was one of two Georgian companies selected to take part in the EU4Digital pilot project to test a solution for the automatic exchange of eCommerce data between Armenia, Georgia, Azerbaijan and EU Member state Germany. All the key information about RKO’s products is now stored in a virtual warehouse, from where the data can be shared to the major international eCommerce platforms.

Veriko says the solution being tested by the EU4Digital project plays a role not only in business development, but in the development of the whole field of trade.

“It takes just one click,” she said. RKO used the German eBay in the pilot, but in the future it will be possible to place listed products on other major eCommerce platform at the press of a button.

Indeed, the virtual warehouse is a game changer for local sellers: once logged into the warehouse, each product receives a unique code, ensuring that data only needs to be submitted once for all parties involved in the process – postal services, customs and online marketplaces. This means their products can then be marketed on major international online marketplaces, while the standardised data allows postal services to launch delivery and ensures seamless cross-border customs procedures.

Following a two-month process to set up the warehouse, in which EU4Digital experts were closely involved with the participating SMEs to understand their needs and address their questions, RKO performed two test sales using the system, one in Germany, the other to Baku in Azerbaijan.

Veriko says the company’s experience with the eCommerce pilot had proved the importance of developing digital trade. 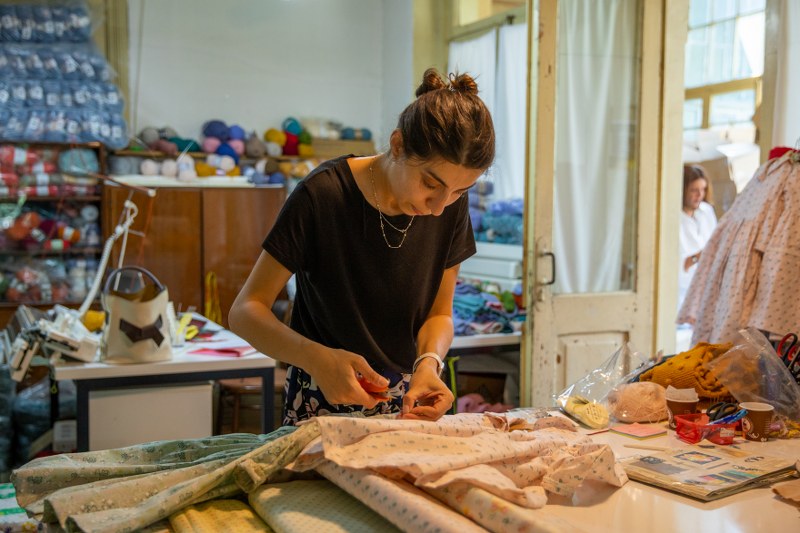 As RKO’s production is seasonal, active sales of winter clothing on eBay will probably start in Autumn.

“RKO is growing permanently,” says Veriko. “The brand founded by three mothers today employs about 60 women: for us it is important to contribute to women’s empowerment.”

The second enterprise participating in the eCommerce initiative was Funduki. The brand was founded in 2012, initially making gifts for large companies, before they opened their own store selling eco-friendly furniture and clothes.

Funduki learned about the eCommerce programme from Enterprise Georgia, an organisation of the Ministry of Economic and Sustainable Development.

“It’s not easy to enter international markets such as Amazon or eBay,” says co-owner Mariam Chakhrakia. “We wanted to try, but we lacked the relevant knowledge and experience and so we never succeeded. However, the virtual warehouse made this process twice as simple: on the one hand, it is easier to place the products, on the other hand, the automated creation and exchange of postal documents in the virtual warehouse allowed us to provide the unique code with relevant information directly to the post office in the process of sales. This means that not only the process is simplified, but we save time as well.”

Mariam says intensive meetings helped them to organise the service: product descriptions have been improved and pilot sales were performed during the meetings.

“It is important that the digital warehouse allows us to place the products not only on eBay, but on other digital platforms as well,” says Mariam. “This is a really big opportunity when you can upload your products to various European trade platforms in one click.”

Mariam adds that participation in the programme also helped them to understand the culture of digital trade.

“Currently our main direction is to get a foothold on the foreign online platforms,” says Mariam. “Our furniture is sold on Etsy, while we are trying to enter eBay only with clothing and accessory lines. We plan to expand our production, but the main goal is to establish the brand on the Western market: there are several different online shops where we would like to place our products, according to each product and its target market. We also want to develop the boutique trend.”

eCommerce has existed for about a half of a century, but has developed dramatically in the last decade. The real explosion came with the pandemic in 2020. And it turned out that most Georgian (and not only Georgian) companies were ill-prepared for the new reality.

“We are trying to develop solutions and create conditions that will help bring the Eastern partner countries closer to the EU,” explains EU4Digital eTrade expert Ruta Salvyte-Tamosiuniene. “Our work includes testing specific solutions that already operate in the EU and should be transposed to the Eastern Partner countries. The pilot was about how to boost eCommerce and remove barriers to access the EU market, especially for SMEs.”

She says businesses in partner countries are failing to use online marketplaces due to lack of awareness and the high cost of entering the EU market.

“Another obstacle is that local eCommerce platforms are not adapted for cross-border trade, for example, due to the fact that prices are not listed in euros or the product does not have an English name. In addition, the average delivery time in the Eastern partner countries is longer than in Europe. To overcome all these obstacles, we created a virtual warehouse, which was successfully tested during the eCommerce pilot,” says Ruta Salvyte-Tamosiuniene.

To address these problems, the pilot project created working groups in the three participating countries – Armenia, Azerbaijan and Georgia. Apart from the companies taking part, these included agencies providing technical support, in Georgia the Ministry of Economics and Sustainable Development through Enterprise Georgia, the Georgian Post, Customs Office, and the owner of the virtual warehouse.

The EU is ready to support Georgia in further developing the digital economy: “The development of eCommerce is key to gradually develop the digital economy in Georgia,” said Nino Samvelidze, Programme Manager for Youth, Culture and Digital Society at the EU Delegation to Georgia. “This pilot plays an important role to raise awareness among potential beneficiaries and demonstrate its impact on businesses and citizens. We hope that the policy and regulatory framework of eCommerce will be further strengthened in the country, and we are ready to further support Georgian citizens to be more connected to the European Digital Market.”

The eCommerce pilot was developed as part of the European Union’s EU4Digital’s initiative, which aims to extend the EU’s Digital Single Market to the Eastern Partner states, developing the potential of the digital economy and society, in order to bring economic growth, generate more jobs, improve people’s lives and help businesses.

Further development of the eCommerce solution is now in the hands of national governments, based on the recommendations drawn from the experience of the EU4Digital pilot, and with further support from EU4Digital’s experts.

The eCommerce pilot was launched by EU4Digital in May-June 2021, when SMEs from the pilot countries placed their goods for sale in Germany and after purchase automatically exchanged product data with delivery operators and customs. Through its EU4Digital initiative, the European Union supports eTrade facilitation and harmonisation among Eastern Partner countries and with the EU, by promoting common frameworks for eCommerce, eCustoms and eLogistics, and working towards Digital Transport Corridors.

Article published in Georgian on On.ge