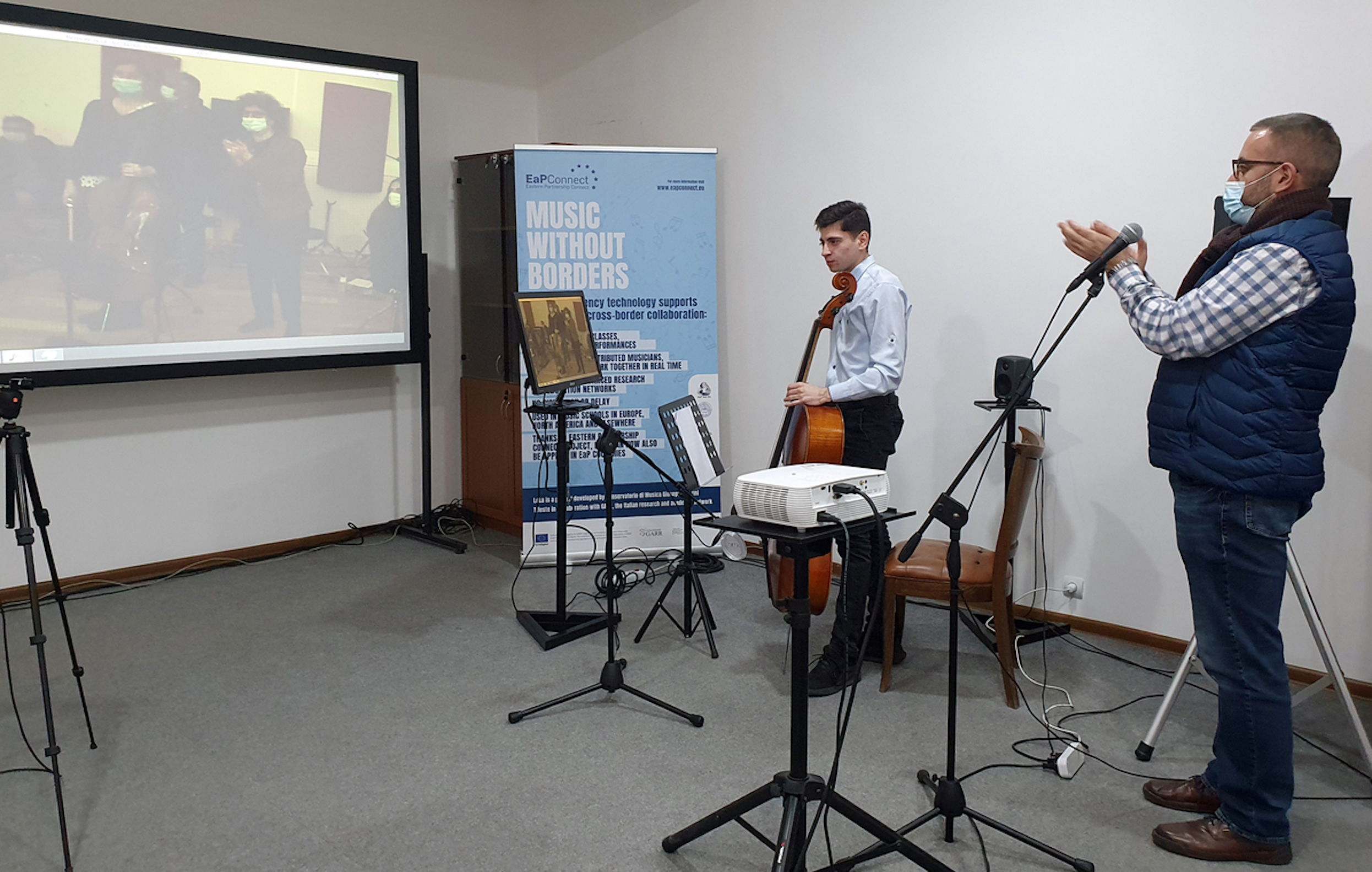 Making a musical connection between Armenia and France

The magic of music and the miracle of digital connection combined in an online event using LoLa (low latency) data transmission technology, provided through the EU-funded EU4Digital EaPConnect project. The Armenian and French national research and education networks (NRENs) ASNET-AM and RENATER supported the ‘Overcoming pandemic and distance with LoLa’ concert, which streamed online on 19 March 2021.

During the event, cellists Marine Rodallec of PIANOANDCO cultural association and Andranik Agajanyan of Komitas State Conservatory of Yerevan performed together in real time, despite being thousands of kilometres apart. With Marine in Marseilles, France, at LMA-CNRS (Laboratory of Mechanics and Acoustics of the French National Centre for Scientific Research) and Andranik in Yerevan, Armenia, at ASNET-AM’s premises, the artists performed a Jacques Offenbach piece together as if they were in the same room.

The concert was prompted by the idea that it would be good to make international connections despite COVID-19 restrictions. The concert demonstrated the potential that technologies and unique services offered by NRENs have in helping to overcome some aspects of lockdowns, opening virtual collaboration bridges for geographically distributed artists and performers. The successful connection between Marseilles and Yerevan relied on cutting-edge, high-bandwidth research and education networks in combination with the LoLa technology. LoLa was developed by Conservatorio di Musica Giuseppe Tartini, Trieste, in collaboration with the Italian NREN, GARR, and was introduced into Armenia through the first EaPConnect project in collaboration with ASNET-AM, which is operated by IIAP NAS RA (Institute of Informatics and Automation Problems of the National Academy of Sciences of the Republic of Armenia).

The connection between Marseille and Yerevan was first tested on 2 March, with rehearsals soon following. The event has forged a collaborative relationship between the French and Armenian NRENs, Komitas State Conservatory of Yerevan and PIANOANDCO, which the event participants hope will continue and grow.

Since LoLa was implemented in Armenia, the ASNET-AM technical team became actively involved in various workshops and international events: a 2018 eMasterclass between Armenia and Estonia; the ‘Music without Borders’ ministerial concert in 2017; and the 2019 ‘Connecting with Culture’ concert that used a record-breaking 5,000km of networks across 7 countries.

As with all these events, the ‘Overcoming pandemic and distance with LoLa’ concert demonstrated the successful convergence of science and technology with culture, and the potential of digital technologies to support harmonious cross-border collaboration.

The EU4Digital: Connecting Research and Education Communities project (EaPConnect) aims to bring together research and education communities from EU and Eastern partner countries and to reduce the digital divide. The project will extend network infrastructure to scale up scientific exchange across borders, offer new services to enhance international R&E cooperation, strengthen national research and education networks (NRENs) in R&E ecosystems, and build knowledge, skills and collaborative working through events, training, and other initiatives.